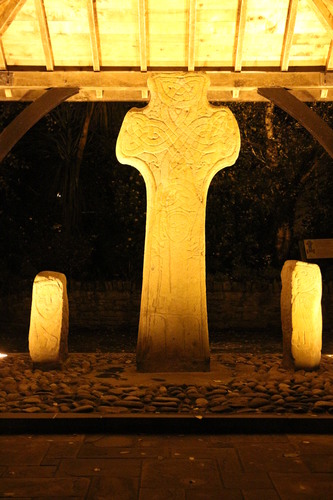 The more I visit the high cross in the town of Carndonagh, the more I am intrigued by it. The art historian F. Henry places the cross to the 7th Century since the braid pattern is similar to the interlace on the c.650 Book of Durrow. He also suggests that it is very important to the understanding of the evolution of high crosses in Ireland. This early Christian cross is thought to represent the transition from crosses carved on slabs, such as that at Fahan Mura, to a slab that is cut out in the shape of a cross. The east face of the re-erected cross depicts bands of broad ribbon interlace (symbolic of the tree of life), 3 birds under each arm of the cross and 8 simplified figures in low relief. Although the central image may depict a Crucifixion scene (arms outstretched), it does not portray Christ in a slouched or suffering position. Typically Irish crosses show Christ as erect, perhaps as the self-sacrificer, a victor over death, resurrected. The body-flanking figures could either be Mary and Joseph, the two thieves or possibly the soldiers and the figures flanking the head are thought to be angels. Below this scene are three figures wearing cowls and long robes, perhaps representing the holy women who visited Christ's tomb after the Resurrection.