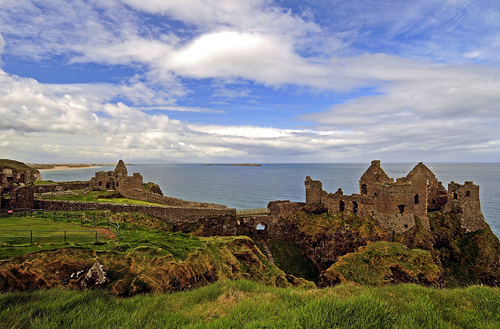 In the 1200s Richard de Burgh, Earl of Ulster, built the first castle at Dunluce.

It is first documented in the hands of the MacQuillin family in 1513. The earliest features of the castle are two large drum towers about 9 metres in diameter on the eastern side, both relics of a stronghold built here by the MacQuillins after they became lords of the district, the chieftan of which was known as Lord of the Route, in the late fourteenth century.

Later it became the home of the chief of the Clan MacDonnell of Antrim and the Clan MacDonald of Dunnyveg from Scotland. Chief John Mor MacDonald was the second son of Good John of Islay, Lord of the Isles, 6th chief of Clan Donald in Scotland. John Mor MacDonald was born through John of Islay's second marriage to Princess Margaret Stewart, daughter of King Robert II of Scotland. In 1584, on the death of James MacDonald the 6th chief of the Clan MacDonald of Antrim and Dunnyveg, the Antrim Glens were seized by one of his younger brothers called Somerled or Sorley Boy MacDonnell known also as Sorley Buy. Sorley took the castle, keeping it for himself and improving it in the Scottish style. Sorley Buy swore allegiance to James IV of Scotland and his son Ranald was made Randal MacDonnell, 1st Earl of Antrim by Queen Elizabeth.

Four years later, the Girona, a galleass from the Spanish Armada was wrecked in a storm on the rocks nearby. The cannon from the ship were installed in the gatehouses and the rest of the cargo sold, the funds being used to restore the castle. MacDonnell's granddaughter Rose was born in the castle in 1613. At one point, part of the kitchen next to the cliff face collapsed into the sea, after which the wife of the owner refused to live in the castle any longer. According to a legend, when the kitchen fell into the sea only a kitchen boy survived, as he was sitting in the corner of the kitchen which did not collapse.

Dunluce Castle served as the seat of the Earl of Antrim until the impoverishment of the MacDonnells in 1690, following the Battle of the Boyne. Since that time, the castle has deteriorated and parts were scavenged to serve as materials for nearby buildings. It is now in the care of the Northern Ireland Environment Agency.

In 1973 the castle appeared on the inner cover of the multi-million selling Led Zeppelin album Houses of the Holy. Keanu Reeves's character makes reference to this in the hit comedy film Bill & Ted's Excellent Adventure when they travel back in time to meet Socrates. The castle also appeared in Jackie Chan's - The Medallion (2001) when it provided an exterior setting for the 'Villains Lair'.