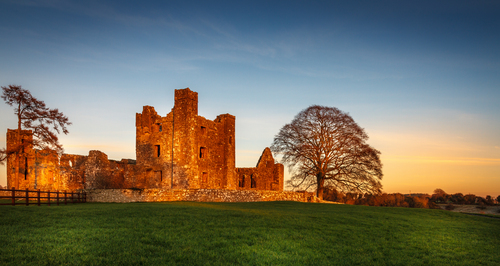 Bective Abbey was founded in 1147 by Murchadh O' Melaghin, King of Meath, for the Cistercians, and was dedicated to the Blessed Virgin. It was an abbey of some importance as the Abbot was a spiritual lord and sat in the Parliament of the Pale. Hugh De Lacy, was buried there in 1195, but was eventually moved to Dublin. The abbey was suppressed in 1536 and the lands were rented to Thomas Asgarde, and eventually bought by Andrew Wyse in 1552. It passed into the hands of the Dillons and then the Boltons, before fallling into ruin. The chief features of the ruins are the combination of both Church and Defence. The Cloister is the best preserved of the buildings and there is a pillar of a figure carrying a crozier. There are also some beautiful arches which are still intact.