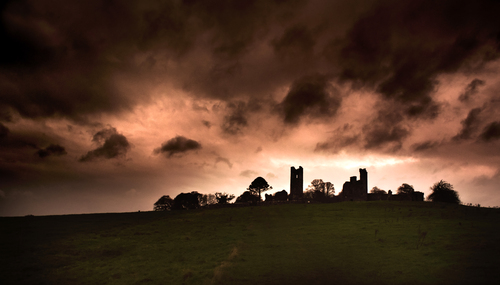 Slane Abbey, Co. Meath, Ireland. St. Patrick lit his Pascal Fire on the Hill of Slane, in direct opposition to the pagan beliefs of the High King. St. Patrick has become synonymous with things Irish; but there was a time when he was viewed as a foreign Christian missionary come to convert Ireland’s Celtic pagans. (originally thought to be Welsh, but new evidence apparently suggests Patrick may have been French.) As the Druids celebrated their feast day on the Hill of Tara, Patrick prepared the Easter feast on the Hill of Slane. He lit his paschal fire at Slane, before the Druids could kindle their sacred fire at Tara. Seeing the flames at Slane, the Druids, warned Laegaire, the High King, that if Patrick’s fire was not put out immediately, it would burn forever in Ireland. The rest is history.