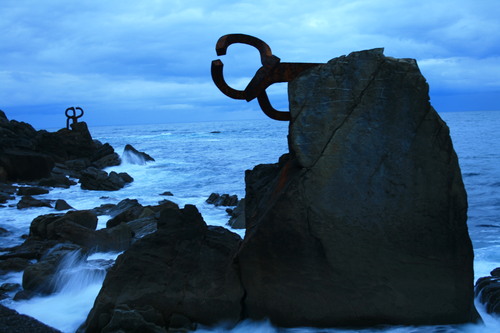 Sea Sculpture Comb Of The Wind

In 1977 three steel sculptures by Eduardo Chillida (San Sebastián, 1924—2002) were installed in San Sebastián’s La Concha bay. Together the trio of sculptures form Comb of the Wind, one of the Basque sculptor’s most significant works. Photographs, plans, works on paper and sculptures show how the project developed from the sculptor’s initial idea to the definitive installation of the finished work. Integrating Chillida’s artistic beliefs and the contribution of industrial workers, architects and engineers, the project, begun in 1952, culminated in this landmark public sculpture, one of the finest and best known in the region. Eduardo Chillida Juantegui (1924–2002) was a Spanish Basque sculptor notable for his monumental abstract works. He received the prestigious Wolf Prize in Sculpture in 1985. Before becoming a sculptor he had been the goalkeeper for Real Sociedad, San Sebastián's football team. Chillida's earliest sculptures concentrated on the human form (mostly torsos and busts); his later works tended to be more massive and more abstract, producing many monumental public works. Chillida himself tended to reject the label of "abstract", preferring instead to call himself a "realist sculptor". At their best his works, although massive and monumental, suggest movement and tension. For example, the largest of his works in the United States, "De Musica" is an 81-ton steel sculpture featuring two pillars with arms that reach out but do not touch. Much of Chillida's work is inspired by his Basque upbringing, and many of his sculptures' titles are in the Basque language Euskera. A large body of his work can be seen in the Basque city, San Sebastián (Donostia), including El peine del viento (The comb of the wind) installed in the (often stormy) sea in La Concha bay at San Sebastian. His steel sculpture "De Música III" was exhibited at the Yorkshire Sculpture Park in the UK, as part of a retrospective of Chillida's work. There is an outdoor sculpture garden dedicated to his work in Hernani, Spain, near San Sebastian.