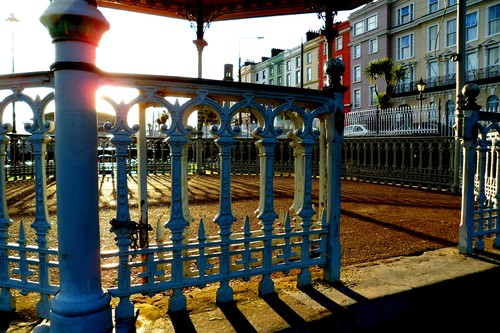 Taken in Cobh (Pronounced 'Cove') in Co.Cork, Ireland. It is just before the 'White Star Liner' building where the offices for people of the Titanic boarded the Launch out to the Ship itself.

It should also be noted most of the passengers boarding here in Cobh for America were booked in 'Steerage' which is why their fatalaties were so high. This is a Banstand that is preserved in the Park as you arrive from Cork in to the Town of Cobh, what is also not well known or stated in the history of the Titanic story was Cobh was the Last port of call before it's ill fated voyage. Taken in evening sunshine as the light was fading, shot looking almost directly in to the light but shaded and protected by the railings of the Band stand as it decended.